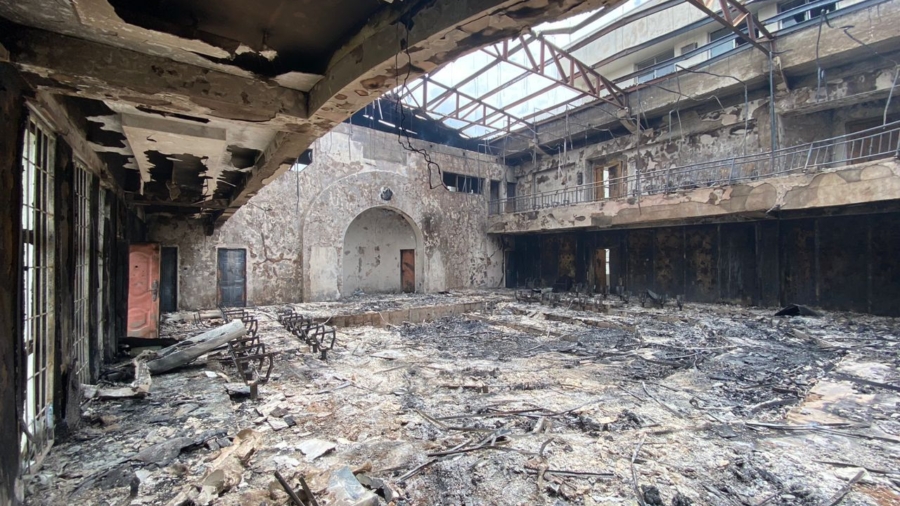 The hollow chamber was completely destroyed. The Speaker of the House of Assembly, Prince Matthew Kolawole, while addressing journalists at the site raised concerns about the possibility of sabotage, but couldn’t ascertain the suspects or motives behind the supposed sabotage.
Reacting to the inquiry as to whether the fire outbreak could be linked to the recent rifts between the State and the Dangote Group, the speaker said the house will leave the findings to the security agencies to carry out their proper investigation and discover the actual cause of the fire outbreak.

The Speaker further reaffirmed that this incident will in no way affect the duties of the House and that their resolution regarding Dangote cement still stands.

According to the Kogi State Government, an investigation into the cause of the fire incident has commenced.

In a statement released by the Kogi State Commissioner for Information and Communications, Kingsley Fanwo, experts were currently working to ascertain the cause of the fire.
The statement reads,
“This is to inform the people of Kogi State and indeed Nigerians that the Kogi State House of Assembly has been razed down by the fire.

The sad occurrence happened in the early hours of Monday, October 10, 2022.

Security and technical experts are currently working hard to unravel the cause (s) of the inferno which has caused significant damage to the complex.
“The state government will inform the general public of findings as they unfold,”

The management of Dangote Group has, however, denied any involvement in the fire.

The Group Chief Branding and Communications Officer Dangote Industries Limited, Anthony Chiejina issued a statement in Lokoja saying Dangote Group is a socially responsible corporate entity, sees the allegations as an attempt to smear the reputation of their company before local and international investors, and condemns this. Stating that such an allegation was unprofessional and irresponsible, they totally refuted the claims.

The statement reads, “Our attention has been drawn to a circulating Press Statement issued by the Kogi State Government, wherein the Dangote Group was accused of allegedly sponsoring arsonists to set the Kogi State House of Assembly on fire in the early hours of Monday, October 10, 2022.

“The statement titled, ‘Obajana: Desperation sets in as imported hoodlums burn down Kogi Assembly’, which was signed by the Kogi State Commissioner for Information and Communications, Kingsley Fanwo pointedly accused our company of burning the Complex “in an attempt to possibly destroy evidence relating to the ownership tussle between the Kogi State Government and the Dangote Group over the Obajana Cement Company.”

As a socially responsible corporate entity, we totally refute this allegation and condemn this unprofessional and irresponsible attempt to smear our image before local and international investors and thus erode our brand value.

“Dangote Group would never stoop so low as to sponsor thugs to destroy any property, belonging to either government or any individual. This runs contrary to our business ethos and everything we stand for as a leading manufacturer with teeming customers and consumers across Nigeria and Africa.

“Our lawyers have been mandated to react appropriately to the damaging allegation from the Kogi State Government within the full extent of the law.

“We urge our stakeholders and the public to disregard such irresponsible and insane statements as we ask all our stakeholders, namely shareholders, customers, suppliers, employees, and the entire community of Obajana and Kogi State at large to remain calm while we follow the legitimate and lawful process to resolve this matter with the State Government.”

This is an ongoing event as the authorities continue investigations.