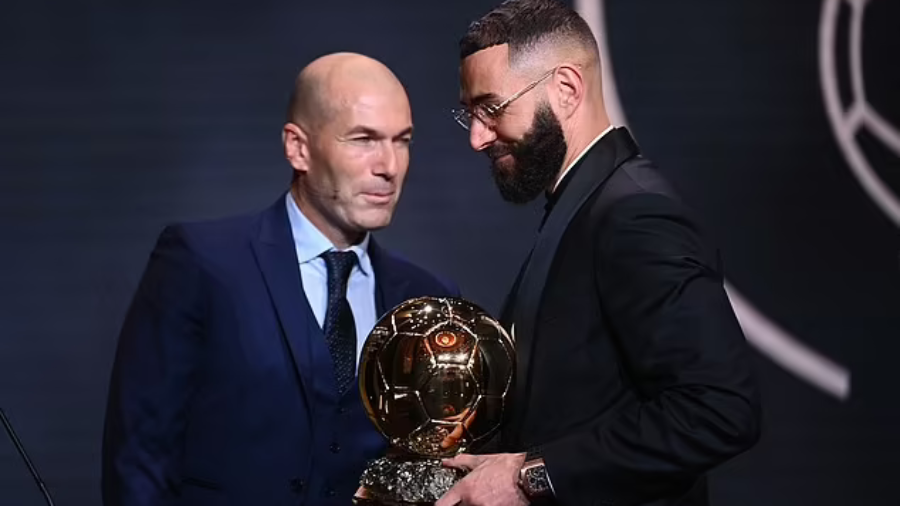 Real Madrid legend, Zinedine Zidane has placed Karim Benzema ahead of Jean-Pierre Papin and Michel Platini as the greatest striker in the history of French football.

Karim Benzema, the Real Madrid striker won the Golden Ball at the annual Ballon d’Or in Paris on Monday.

Benzema’s much-deserved win came as a result of the role he played in his club, Madrid’s wins. The Spanish club had won both the Champions League and La Liga. In addition to his club wins, Benzema also lifted the Nations League trophy with his country, France back in October 2021.

The former French and Real Madrid Player, Zidane, who presented the trophy to Benzema at the ceremony, stated that the forward is the best striker in the history of his country.

Speaking with L’Equipe, he said; “The best striker in the history of French football? Everyone has their favorite player.”
“Some people will tell you it’s Jean-Pierre Papin with his exceptional goals, others will talk about Michel Platini.”

“For me, it’s Karim, yes, because I’ve been around him and I know what he’s worth. In any case, he deserves to be very high.”
“I wish him to continue for a long time to go for records and to shine on the field, with Real Madrid, and with the French team.
‘He is capable of going even higher.”

There’s been a wide consensus on the possibility of Benzema winning the Ballon d’Or. The Madrid forward after receiving his award said: “This prize in front of me makes me really proud.”
“When I was small, it was a childhood dream, I never gave up. Anything is possible.”
Relishing his moment of glory, he said: “I’m really proud of my journey here. It wasn’t easy, it was a difficult time for my family as well.”

Benzema was nominated among 30 other players as six-time winner Lionel Messi and his Paris Saint-Germain team-mate Neymar didn’t make the list, making it the first time since 2015, that Messi wouldn’t make the Ballon d’Or list.

Some of the players that made the list include; Kylian Mbappe, Robert Lewandowski, Erling Haaland, and Mohammed Salah.