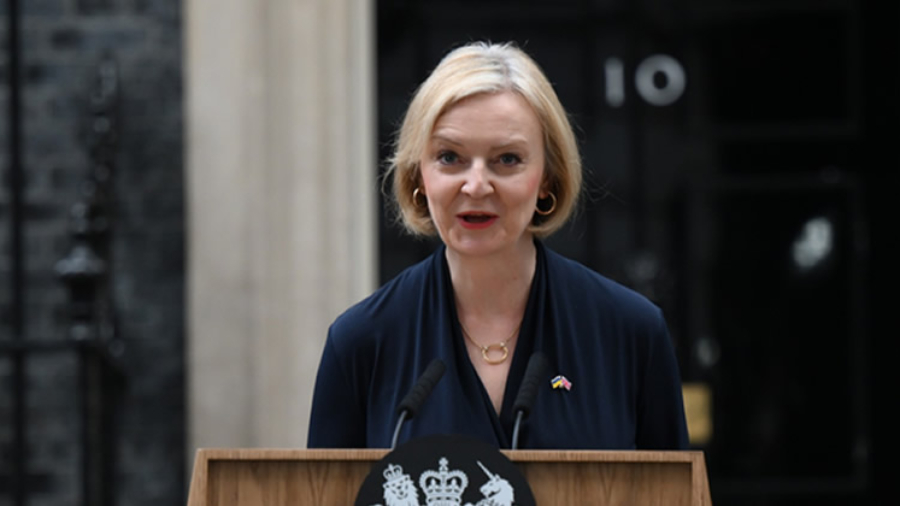 Barely six weeks after assuming office as the prime minister of the United Kingdom, Elizabeth Truss has been forced to step down.
Truss, who has only spent 45 days in office, stepped down after a week-long emergency contest to find her successor.

When she took over from the former prime minister, Boris Johnson, she had promised to “ride out the storm” of the country’s economic crisis. Stating that her priorities will be tackling “soaring energy prices, improving the UK’s energy security, and fixing the National Health Service”.
However, she’s been unable to deliver her mandate as she appears to be engulfed in her own promises.

Mary Elizabeth Truss (born 26 July 1975) is a British politician who has served as the prime minister of the United Kingdom since 6 September 2022. She announced her intention to resign as Prime Minister on 20 October 2022. She will continue to serve until a successor is chosen “within the next week”. Her resignation makes her Britain’s shortest-serving prime minister.

Announcing her decision to step down, Truss said:
“I entered office with a vision for a low-tax, high-growth economy that would take advantage of the freedoms of Brexit.”

“I recognize that, given the situation, I cannot deliver the mandate on which I was elected by the Conservative party. I have therefore spoken to His Majesty the King to notify him that I am resigning as leader of the Conservative party.”
“This morning I met the chairman of the 1922 Committee, Sir Graham Brady. We’ve agreed that there will be a leadership election to be completed within the next week. This will ensure that we remain on behalf to deliver our fiscal plans and maintain our country’s economic stability and national security. I will remain as prime minister until a successor has been chosen.”

“We’ve agreed that there will be a leadership election to be completed within the next week. This will ensure that we remain on a path to deliver our fiscal plan and maintain our country’s economic stability and national security.
“I will remain as prime minister until a successor has been chosen.”

Like Boris Johnson, Truss, who had served in the former prime minister’s government as Foreign Secretary also faced several diplomatic challenges majorly as a result of Russia’s war on Ukraine.

Since the Queen of England had passed on two days after Truss assumed office as prime minister, the country went into a period of national mourning. This had given Truss ample time to take a break from a marathon leadership campaign that lasted through most part of the summer. There were expectations that this period will usher in a new and better approach to political debates.

The first and major tragedy of her term as prime minister was on September 23, when her Finance minister, Kwasi Kwarteng initiated a series of tax cuts which was expected to be funded by higher government borrowing. This according to him was planned to pull the country out of recession.
This move which defied every rule, (most importantly, its independent audits by the Office of Budget Responsibility) soon proved to be a miscalculated risk as it plunged the pounds. This tax cut happens to be the biggest tax cut in 50 years.

Following the resultant economic turmoil, Truss had on October 14, fired Kwarteng in an attempt to salvage the situation. He was replaced by the former foreign secretary, Jeremy Hunt. This made him Britain’s fourth finance minister in less than four months.

After assuming his office, Hunt decided to scrap almost all the measures announced by Kwarteng in an effort to restore the government’s credibility.

Truss’s woes worsened after Home Secretary, Suella Braverman, was forced to resign from her cabinet on October 19.
In her resignation letter, Braverman who subtly criticized Truss’s leadership wrote: “The business of government relies upon people accepting responsibility for their mistakes. Pretending we haven’t made mistakes, carrying on as if everyone can’t see that we have made them, and hoping that things will magically come right is not serious politics.”

Truss’s quick exit has called for another general election in Britain to usher in the fifth leader in less than seven years. Although there is no certainty of fresh elections until 2025.